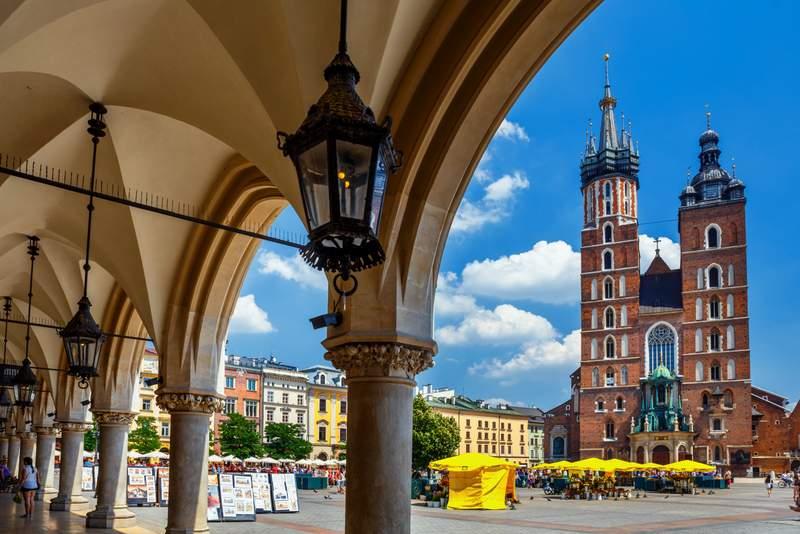 Old Town
The Old Town is a magical place. For many centuries kings and their important guests used to come to Kraków through the St. Florian’s Gate, passed through the Main Square and continued along Grodzka and Kanonicza streets to the Wawel castle. Today the royal route is vibrant with life and crowded with tourists – even though a lot has changed, the place has retained its splendour typical of a royal residence. In 1978 the perfectly preserved medieval architectural arrangement, one of the most magnificent in this part of Europe, as well as the unique complex of historic sites from different periods, became the basis for the inscription of the former Polish capital on the UNESCO list. Tenements in various styles, beautiful residences, centuries-old churches, majestic university buildings, as well as the unforgettable Wawel, make you forget about the modernity. The Old Town, which includes the town from the period of the foundation of Kraków (1257), was closed with a ring of defensive walls as early as in the 14th century. At the beginning of the 19th century the walls had 47 towers and 7 main gates. The fragment of the fortifications with the aforementioned Florian’s Gate and three adjoining towers proves how mighty the fortifications were. At the end of the 15th century, another impressive defensive structure was built: the Barbican (once called the ‘Saucepan’ by the Cracovians). It used to be indestructible, and it even resisted the 19th century city cleaning-up campaign, during which the city fortifications were torn down. The Planty city park, a green ribbon now encircling the historic town centre, was created in place of the city walls.

The Old Town is also famous for a large number of historic churches (nearly 30), considering its size. On the Main Square stands the Romanesque Church of St. Adalbert. It is one of the oldest churches in Kraków. It dates back to the turn of the 11th and 12th centuries and was raised on the foundations of an older structure. Even though it was rebuilt the 17th century in Baroque style, it retained traces of the Romanesque style – both inside and outside. Other magnificent examples of sacred architecture include the church of St. Andrew (Grodzka 56) and the Baroque Church of Sts. Peter and Paul (Grodzka 54) from the 17th century, with characteristic figures of 12 apostles that decorate the temple’s fence. Gothic and Renaissance tenements also add charm to Grodzka street.

One of the Old Town quarters is occupied by the Jagiellonian University, the inheritor of the Kraków Academy founded in 1364 by king Casimir the Great. The university library, which boasts the largest book collection in Poland, is the university’s treasure. Originally it was located in Collegium Maius, one of Europe's few preserved medieval university buildings. Today, the building houses a museum with interesting and precious collections of items, among which you will find one of the world’s oldest globes with the name “America” on it.

The Main Square was marked out in the middle of 13th century. It was one of the largest squares in Europe and played the role of a commercial, administrative and judicial centre. The enormous square (200 x 200 m) was designed in such a way that it would meet the needs of merchants travelling along trade routes. The taverns and inns that used to surround the square are now replaced by restaurants and coffee shops. Colourful umbrellas, cabs awaiting guests, as well as pigeons, which perch on the historic buildings, lend the place a unique artistic and ludic atmosphere.
The Sukiennice Cloth Hall, reigning supreme in the middle of the square, reminds of the Main Square’s commercial role. The market stalls stood here as early as in the 13th century, but the elegant building we can admire now dates back to the 16th century (the earlier Gothic building burnt down, and what remains, among other things, are the pointed-arch arcades).
Sukiennice Cloth Hall, the pearl of the Polish Renaissance, still fulfils its functions: it contains stalls with various souvenirs, works of art and jewellery. The first floor houses the Gallery of 19th-Century Polish Art, a branch of the National Museum.
The most valuable building on the square is the Gothic St. Mary Basilica, which contains a unique monument: a 15th century wooden multi-panelled altar made by the famous sculptor, Veit Stoss. Apart from visiting the church, you can also climb one of its towers and delight in the beautiful view of the city.

Wawel castle
It is best to reach the Wawel hill from the Kanonicza street, one of the most picturesque in Kraków. Here you can admire buildings from various periods: Gothic, Renaissance, Baroque and Classicist. From the 14th century this street was settled by cathedral canons, who built their representative houses. The hill, dominated by the cathedral and the castle, is one the most visited hills in Poland. This site, like no other, has witnessed the development of the Polish state and the Polish culture. Nearly all Polish kings were crowned and buried here (it is also a burial place of many eminent Poles). Wawel also houses an extremely extensive museum collection. The majestic cathedral dates back to the 11th century. Today it carries traces of various styles and is surrounded by 18 chapels. The most magnificent is the Sigismund’s Chapel, covered with a gilded dome, which became the mausoleum of the last kings of the Jagiellon dynasty. It is considered to be the most remarkable example of the Italian Renaissance in Poland. The castle, which survived until today as a magnificent Renaissance residence, houses extremely valuable museum collections. For example, you can see a collection of militaria, as well as some priceless items, such as the 13th century coronation sword (Szczerbiec) or the famous 16th century Flemish tapestry. The chambers and the arcaded courtyard with three-storey galleries make a memorable impression. When you are visiting Wawel, do not miss the Dragon’s Den. The dragon lives there no more, but the charm of the famous legend remains.